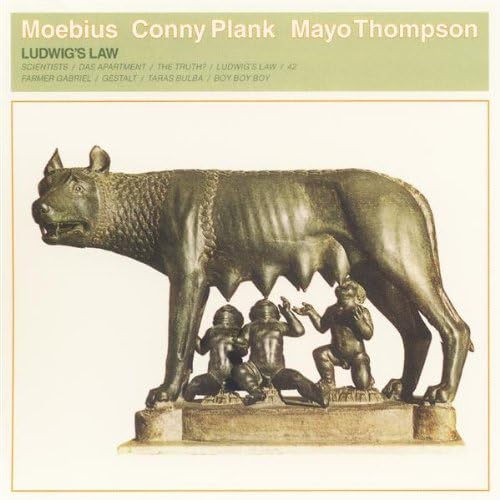 Mayo Thompson has led the Red Krayola through 32 years, countless different lineups, and stylistic shifts from freaked-out psychedelia to Marxist funk, but he's rarely chosen to step out from under the Krayola's umbrella. This collaboration, which was recorded in 1983 but remained on the shelf for 15 years, is one such occasion. The other participants were veterans of Germany's electronic-music scene; keyboard player Dieter Moebius has recorded with Cluster, Harmonia, and Brian Eno, while trumpeter and producer Conny Plank has worked with Devo, Kraftwerk, and Ultravox. The two Germans constructed Ludwig's Law's backing tracks using the emulator, an early sampler that enabled them to duplicate the other instruments without having to deal with the musicians who played them. The duo recorded a series of stately fanfares and brittle Talking Heads funk, over which Thompson narrated a series of skewed monologues about philosophy, art, history, and careless farmers. --Bill Meyer

The Tren Brothers consist of guitarist Mick Turner and drummer Jim White, both members of the Australian instrumental outfit Dirty Three. With their move to Chicago, the Tren Brothers decided to hit the studio to lay down five tracks, recorded at Electrical Audio by Greg Norman. From the outset of this EP, the listener knows that the Tren Brothers have weathered many lands together. The delicate interplay of instruments shows a companionship that was established in their years of touring in the Dirty Three. Throughout the EP, shimmering guitar tones from the inventive Turner sprinkle along the broad landscapes, while the underrated drumming of White swirls and pulses at the perfect moments. The use of melodica and harmonica against occasional loops adds another dimension that always sparks at the appropriate time, as in "Gold Star Berlin" and "Away." While listeners may be used to the dramatics of violin in Dirty Three, the exclusion of the instrument seems to make this EP more powerful. Tren Brothers EP is a beautiful, epic affair that packs in adventure and longing in a short length of time. Highly recommended. ~ David Serra, All Music Guide